ATV/UTV Map Info
Juneau County ATV/UTV routes are located in the Towns of Armenia, Cutler, Clearfield, Finley,
Fountain, Germantown, Kingston, Lisbon, Necedah, Orange, Plymouth, Kildare, Marion, Lindina, Lemonweir, Seven Mile Creek, Summit and the Village of Necedah, Camp Douglas, Hustler, Lyndon Station, Union Center, Wonewoc, and City of New Lisbon, Elroy, and Mauston). Note: not all town, village, or city roads have an ATV/UTV route designation. Each town, village, or city has their own ATV/UTV ordinances (rules of the road) regarding the operation of ATV/UTVs. These ordinances are similar but not exact. For specific “rules of the road” in the above jurisdictions contact the respective clerk’s office.

Amenities such as food, gasoline (limited on route), and lodging are generally available on and about the ATV/UTV routes. Parking Areas (vehicle and trailer) are identified on the maps and generally selected local businesses such as the Vets Hall in Necedah, Eagles Nest Resort, Wilderness in Sprague, Reel Inn in Necedah, and Road House in Necedah can accommodate. 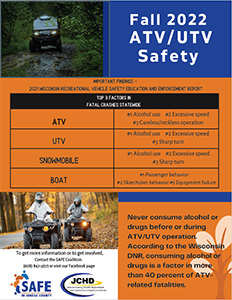